Lonely languages: the isolates of Africa. 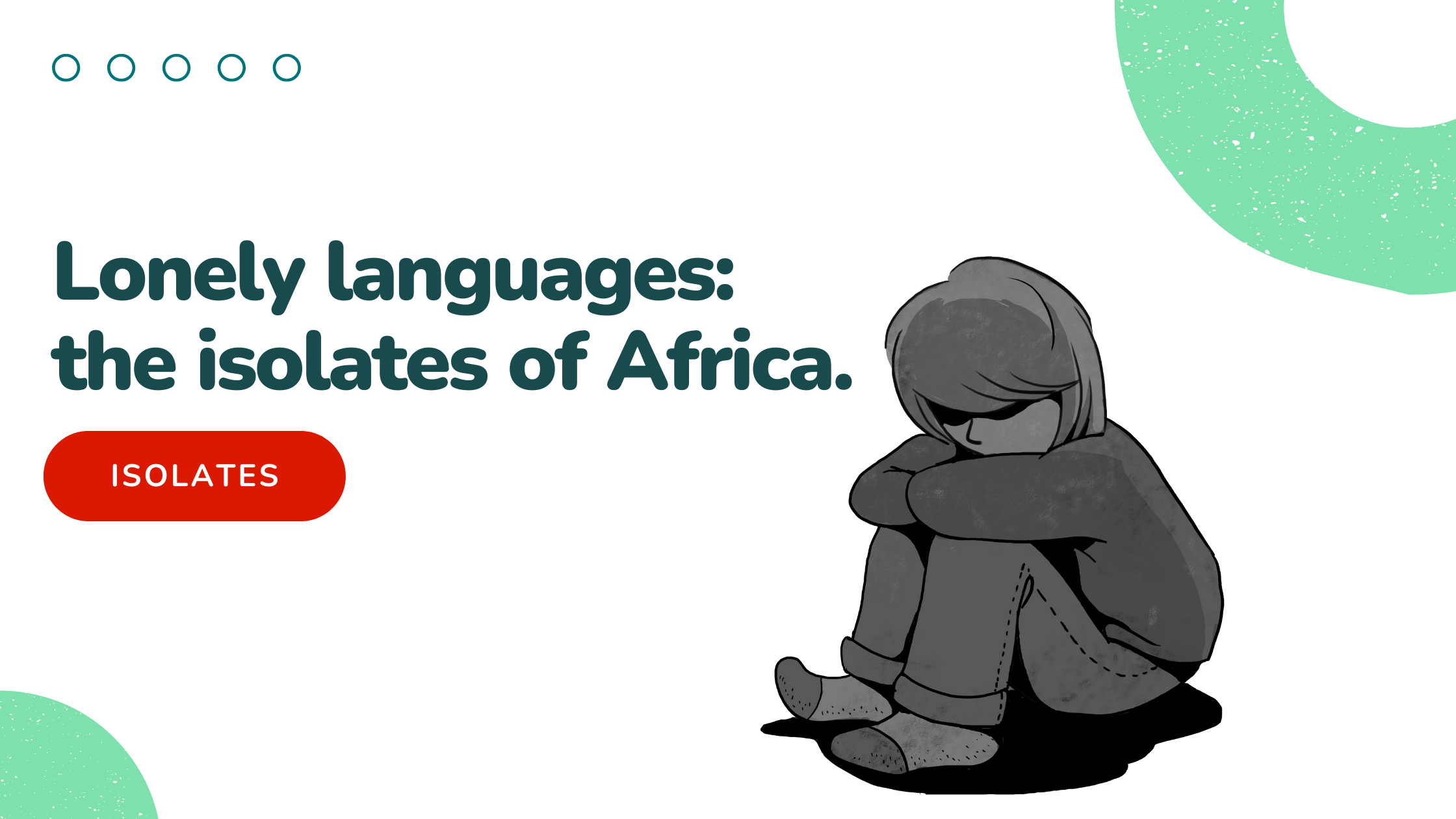 "Wealth is coming. It is on the way."

Everyone was hopeful when Ochung'tir left Gobei village in 1952 to look for greener pastures in Mombasa.

The 27-year-old was the third born in a polygamous family of twenty children and three wives, him being the child of the second wife.

Ochung'tir had died in a fatal fire accident, and his remains burnt beyond recognition.

The family had to contend with burying a banana sucker to symbolize his body. Just like the sucker would grow to become a banana tree and produce other suckers, so would Ochung'tir's soul come back in another form.

Forty years later, in 1992, the soul returned! Live and kicking but fragile from old age. Only that it wasn't a soul but Ochungtir himself.

The chaos that happened next is comparable to Usain Bolt breaking the 100m world record. Everyone in the family scattered, screaming and wailing, thinking they had seen a ghost.

Anyway, who wouldn't when in such a situation?

When things finally settled and everyone regained their sanity, he explained that he had indeed stayed in the said house in Mombasa but had left a month before the fire incident after failing to get a job as a mechanic.

The plan was to go to Uganda. He had heard rumours that there were plenty of jobs for mechanics there. He, however, did not manage to cross the Kenya-Uganda border.

It is in Kacheleba West Pokot, where he settled after struggling for many years. He got married and was blessed with two daughters.

Why did I start with Ochungti's story?

Because death is inevitable and permanent for human beings, you can't partially die. If you are dead, you are past tense unless you want to cause numerous heart attacks like Ochungtir.

Things are different when it comes to languages. Languages die metaphorically and poetically.

Linguists tend to disagree on many issues, but at least there is a consensus among them about the definition of a dead language.

A dead language is a language that was once the mother tongue of a community but no longer has first-language speakers. A good example is the Latin language.

Does this mean you can revive a language?

Yes! Take the case of Hebrew. It has lived, died and been brought back to life, and millions of Israeli Jews speak it as their mother tongue.

Enough about the dead languages. Let's talk about the living and spoken languages, focusing on Africa.

African languages were for a long time "classified" into four primary language families: the Afroasiatic, Niger-Congo, Nilo-Saharan and Khoisan.

The families have, however, been wildly disputed and debated. New research has shown connections and differences resulting in the emergence of smaller language families, isolates and other unclassified languages.

An anti-language or cant is a language created and used by a smaller community within a larger community to prevent outsiders from understanding them.

Would you consider Sheng a Slang, pidgin, anti-language or creole?

Isolate is a language that cannot be classified into larger language families. It is the only language in its family.

Why are these languages isolates?

As mentioned earlier, linguists usually have differing views on so many levels. I am always intrigued by how many "depends" answers there are in the field.

It boils down to whether the linguist is a lumper or a splitter.

The number of undisputed languages isolates in Africa is small. They include:

(a) Bangime - It is a cant language spoken by a group of Dogon people in Mali. A few theories suggest that escapees from slave caravans who sought refuge in the area created the language.

(b) Jalaa or centum is an extinct, isolate language that was spoken in northern Nigeria. The descendants of the speakers of the language, Jalabe, now speak the Bwilim dialect of the Dikaka language. Thirty years ago, only a few elders remembered a few words of Jalaa that their parents had used.

(c) Laal is an endangered isolate spoken by 800 people (2000 census) on the banks of River Chari in Chad. Most natives have shifted to Bagirmi, a popular language in the area.

(d) Hadza - This is an isolate language spoken around Lake Eyasi in Tanzania. It was once considered part of the Khoisan language family because of the click sound. Although Hadza and Sandawe have a click sound and are in the same region, they have different lexicons.

The languages in this section are relatively controversial but deserve mention all the same.

(a) Meroitic language - It existed along the shores of the Nile River between 8BC and 350AD. The Axumite armies eventually destroyed the language. Meroitic monuments with numerous inscriptions have been discovered, suggesting that the inhabitants must have used hieroglyphics before shifting to the Meroitic scripts. There are now around 40 terms transcribed with some certainty, making some scholars argue that the language is Nilo Saharan.

(b) Shabo - It is an endangered language spoken by 400 people (2003 survey) in South West Ethiopia. Some scholars insist that the language is Nilo Saharan. On the other hand, some argue that once the loan words are removed, there is no obvious relationship with any other language. The natives are shifting to the neighbouring languages of Majang and Shakicho.

📌 Only seven people in the world speak the language.

The OvaHimba use only four colour names:

How many colours do you have names for in your native language?

Did we speak one original language?

Assuming we did - which most religious and linguistic texts tend to support. The language then evolved and split through isolation into 1000s of languages presently spoken worldwide.

And now, due to the constant connections, languages are dying, getting extinct and merging, becoming one. Humans may speak one language in the next 1000 years.

Is it, therefore, true that the past is the future and the future is the past?

Located in Kwale County, Chale Island is one of Kenya's best beaches. The secluded island has a gorgeous white beach bounded by coral reefs and a mangrove forest. There's a fusion of indigenous flora and fauna.

The magical island is divided into a resort and a sacred forest used by the locals.

0 Comments
Thanks for the feedback.