Bull Jumping ceremony of the Hamar 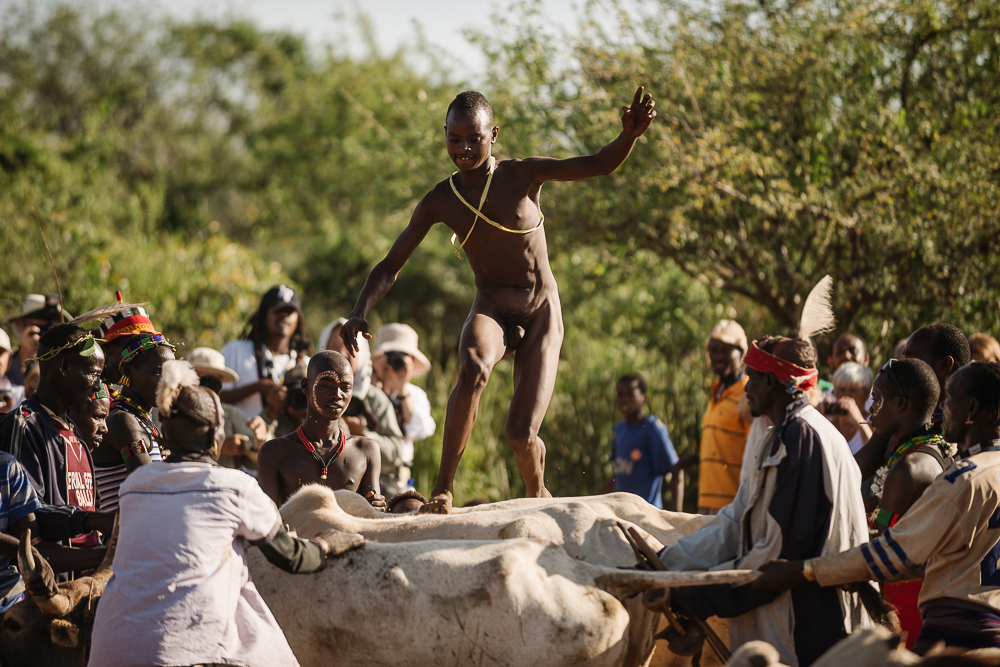 In the southwestern region of Ethiopia, down the Omo River Valley, lives the Hamar tribe. They are pastoralists and greatly treasure their cattle. While African tribes have diverse rituals/methods of initiating boys into manhood, for the Hamar, it involves bull jumping.

The three-day-long event is quite important to both the initiate and his family. Failure brings him and his family shame, and the initiate would have to wait until the following year for another attempt. On the other hand, if he succeeds, he is set to marry a girl of his family's choice and also qualifies to own cattle.

The bull-jumping is the last part of the event(ukuli) and usually happens around October/November, at the end of harvest. According to traditions, the eldest child of the family must go through the bull jumping ceremony rite of passage before his younger ones can follow, and it is the father who decides when his eldest son is ready.

When the young man is ready, the father hands him a special stick called boko. The boy then gives it to girls he meets along the way, and they must kiss it three times as a form of blessing and return it to him.

He then travels to all his relatives carrying the stick to announce that he will prepare to perform the ritual and to invite them to participate in the ceremony.

As an invitation, the guests receive a strip of bark with knots. The number of knots represents the number of days left to the ceremony. The invitees then cut a piece from the rope every day to keep track of the days left before the ritual.

In the period preceding the bull jumping, the boy is mentored and taught the behaviour he needs to present to become a man by a male adult.

On the day of the ceremony, the young initiate is stripped of all his goods, including clothes. The one piece of clothing he is allowed to wear is a small piece of fabric or leather to cover the intimate parts.

The initiate is partially shaved on the head by the Maza( men who have already faced the bull jumping ritual but are not yet married).

He is then rubbed with sand to wash away his sins and smeared with dung for strength. Strips from tree barks are also strapped around his chest to serve as spiritual protection. Between then and the moment of the bull jumping, the boy cannot touch women and only eats sorghum, honey and drinks milk.

The ceremony takes place at a designated area outside the village, usually along the river bank. Depending on the social status of the boy’s family, about 100 to 300 people gather to witness the event. The women, dressed in traditional clothes and adorned with bells around their legs, start dancing together playing loud horns. The boy’s maternal family wear a beaded belt around their waist and is usually not expected to participate in this part of the ceremony.

The bull-jumping then starts with the initiate leaping over about ten to fifteen castrated bulls that have been smeared with dung to make their backs slippery four times without fail. The boy may choose to jump additional times and even add more cattle to the line if he believes he is strong enough and prepared. This day is considered the most important in the life of a man.

The cringy but terrifying part of the initiation process is the whipping of the female relatives of the boy, including his mother and sisters. They show their support by begging the Mazas to flog them until their backs are bloodied. It is believed that the greater the pain, the higher the level of submission and loyalty to the Maza, and the scars left on their bodies are a symbol of loyalty. This whipping is used to create a form of debt, and the loyalty shown by the girls is demanded back in times of need.

This endurance by the women is not only a display of courage but also proof of how loved the boy is by the village. The more women willing to be whipped, the greater the level of respect he has from them.

During the flogging, no emotion is seen whatsoever, neither from the woman nor from the Maza. Not a single crying sound comes from the women or pity on the face of the men.

If the initiate manages to complete the whole jumping of the bull without falling, the test is considered passed and therefore, he becomes part of the Maza, and from that moment on he can marry the girl that the family has chosen for him.

At the end of the ritual, the new Maza is completely shaved by the other Maza, and his relatives congratulate him with songs and dance, and animal skin hand around his neck. The Maza status lasts until the new adult decides to marry, usually a few months before the wedding.

N/B: If a young man is blind or paralyzed, he is raised above the cattle by the Maza, or he can be allowed to run under the neck of the cattle.

Ethiopia's Bull-Jumping Ritual Turns a Boy Into a Man

LOVE BEFORE BRAVERY AT THE HAMAR BULL JUMPING CEREMONY

The Hamar: The bull jumping ethnic group of Ethiopia

Why These Women Ask Their Male Relatives To Scar Their Backs

The Culture Behind The Bull Jumping Ceremony

THE BULL JUMPING, INITIATION RITE FOR THE HAMER