The Hare and the Elephant 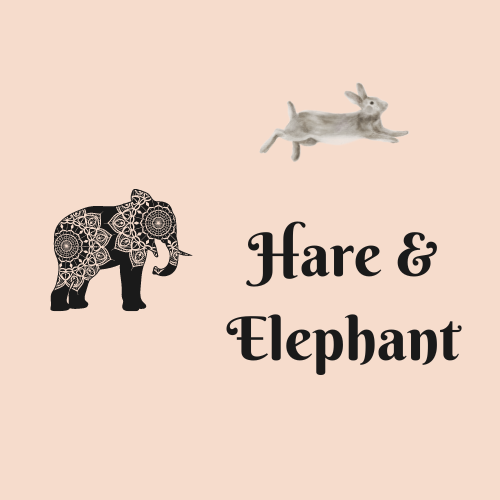 A herd of elephants went to gather honey to take to their in-laws. On the way, they met a hare about to cross the river. She said to one of them: "Please help me get across the river." The Elephant agreed to this request and asked the hare to jump on his back. Sitting on his back, she immediately noticed the two bags full of honey the Elephant was carrying.

She started eating honey from one of the bags and, when it was finished, asked the Elephant to hand him a stone to play with. However, she put the stone in the empty bag and started eating the honey from the second bag.

After eating it all too, she asked for another stone claiming she wanted to throw it at the birds. The Elephant handed her the stone and then another. The cycle continued until she filled both bags.

Realising the elephants were approaching their destination, the hare pretended to have arrived and went on her way.

Later, when the Elephant looked at his bags, he realised they were full of stones! He exclaimed to the others: "Oh my goodness! The hare has finished all my honey!"

The hare was leaping away at a distance, and they immediately set off after her. They caught up with her within no time, but as the elephants were about to grab her, she disappeared into a hole.

However, the Elephant managed to get hold of her tail, and the skin peeled off. Elephant next grabbed her by the leg. The hare laughed loudly, saying: "You have held a root mistaking it for me!" Subsequently, the Elephant let go of the hare's leg and got hold of a root.

Hare screamed and said: "Oh, you have broken my leg!" As Elephant struggled with the root, she manipulated her way out and ran as fast as possible.
By this time, the Elephant had managed to pull out the root, only to realise it was not the hare's leg. The hare leapt over the bushes in a bid to escape, and he followed her.

In her escape, she came across some herdsmen and said to them: "Do you see that Elephant from yonder? You better run, for he is coming after you."

The men scampered and went their separate ways. When Elephant saw them running, he thought they were after the hare and followed them.

When he caught up with them, he asked if they had seen a hare with a skinned tail. The herdsmen told him that she had gone in the opposite direction.
Next, the hare came upon some women sewing outside the homestead and said to them: "Hey, mothers, do you see that Elephant coming this way? Run away, for he is coming after you."

On hearing this, the women scampered for the safety of their houses.
However, the Elephant caught up with them and asked if they had seen a hare with a skinned tail. The women pointed in the direction the hare went.

Lastly, the hare came upon a group of other hares, to whom she said: "Hey you, hares, do you see that Elephant coming? You should all skin your tails, for he is after those hares with unskinned tails."

All the hares quickly skinned their tails. At the same instant, the Elephant arrived and asked them: "Hey you, hares, have you seen a hare with a skinned tail going towards this direction?"

The hares replied: "Don't you see that all our tails are skinned?" They displayed their tails confidently. On noticing that their tails were skinned, the Elephant realised the hare had tricked him. He could not find the culprit, for all of them were alike. And that is how the hare escaped his wrath.

The Adumu Dance of the Maasai , Anansi and the Turtle , Learn Maasai: Common phrases and their meaning