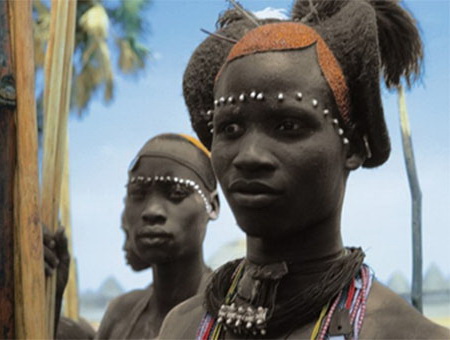 Their language is called Dhøg Cøllo, dhøg being the Shilluk word for language and mouth. It is also known as Chollo, Chulla, Colo, Dhocolo and Shulla, and is closely related to Dholuo. It is spoken by about 2,000,000 people.

The name Shilluk (singular Shilkawi) was given to them by the Arabs. The inhabitants were called ocholo, plural wate chol, meaning black. A second name of the people is okaho, ’’descendants of Kaho.“ This name is connected with Nyikang, the national hero of the Shilluks.

The Shilluk were historically united in a single state (kingdom) headed by a divine king (Reth) chosen from the sons of previous kings. According to Shilluk legends, the kingdom was founded in 1490 and its legendary first ruler was the hero known as Nyikang. Nyikang was the son of a king, Okwa, who ruled a country located near Lake Albert in Uganda, where the Acholi live. After Okwa's death, he went to war with his brother Duwadh, the legitimate successor to the throne. Facing defeat, he left his homeland with his camp followers and migrated northeast forming the Shilluk Kingdom.

The Shilluk traditionally was divided into several classes of royalty, commoners, royal retainers and slaves, and the king’s physical and ritual well-being was held to ensure the prosperity of the whole land.

Nyikang is believed to have been given special gifts by Jwok (God) and as the patriarch of the tribe has become the Shilluk national hero.

The Shilluk have a sophisticated hierarchical ruling structure and are the only tribe in South Sudan still having a kingdom and a king. The King is the ultimate authority and the kingdom is divided into areas overseen by Chiefs, and each village is overseen by a sub-chief and elders. The current Shilluk King is Reth Kwongo Dak Padiet who became reth in 1993.

The Shilluk are majorly pastoralists and the cattle were a source of wealth. They also practice agriculture, fishing and hunting. The men tend the cattle (cows, goats, sheep), farm, hunt, fish and build. Common crops are maize, dura, beans, simsim, pumpkin and gourds. Wild fruits and leaves of certain trees are gathered by women and children. Women may keep a small garden to grow vegetables and maize. Shilluk women carry out all domestic work, including brewing beer, gathering water and firewood. They also help the men to build by fetching water to make mud and by gathering thatch.

Painting of the body

They smeared their heads and the upper part of their bodies with red earth/ochre while the lower parts were covered in ashes. Sometimes the whole body was painted white or red, and lines or figures drawn across the face

The lower incisors were removed in early childhood and its omission was believed to cause sickness. The teeth were taken out to cure sore eyes and women would say that unless they were taken out, their child would undoubtedly be deformed in some way, when it grew to maturity. Another explanation for extracting the teeth was to keep them from using abusive language. 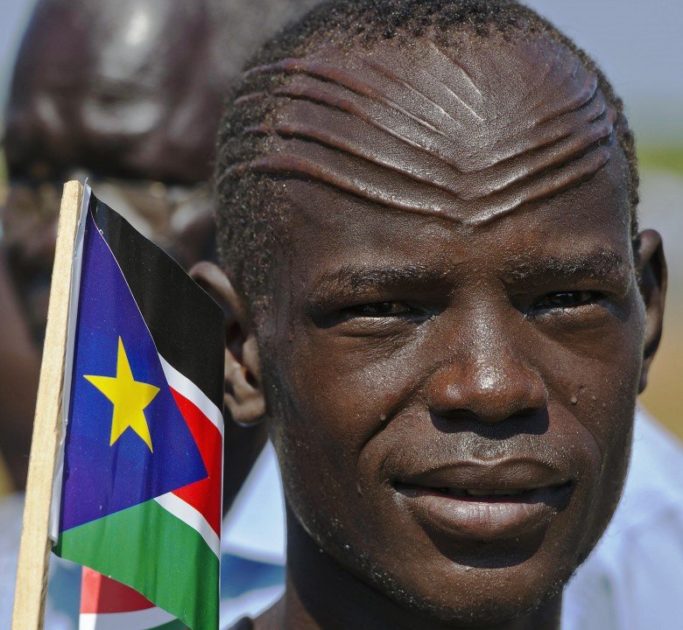 The tribal marks made on both women and men were from three to five rows of dots across the forehead. The regular instrument for tattooing these dots into the skin was a crude iron similar in shape to a scalpel.

The women had either no or only short hair on the head. They shaved their heads with a razor consisting of a straight piece of thin iron, whose edge was sharpened, or with a short piece of iron with one side beaten out to a thin edge. Both sexes scrupulously remove any hair on the body by pulling it out with a kind of pincers. The men even pulled out their beard and eyelashes.

The most important spiritual force was that of Nyakang. Special annual sacrifices were made to Nyakang at the start of the rainy season. There was also the universal Shilluk creator god, Jouk, with whom deceased persons would reside eternally if they were well-behaved during their lifetime.

According to Shilluk origin myths, it was from the Nile that Jouk created D'ung Adduk (White Cow). In turn, D'ung Adduk gave birth to a son, Kola, father to U-mahra, who bore Wad-maul. Wad-mau had a son Ukwa, who was the father of Nyakang, ancestor of all Reths. A few Shilluk have turned to Islam and Christianity, but traditional beliefs are still strongly held.

Upon birth, the umbilical cord of baby boys is buried to the right of the front door while that of girls to the left. The practise of removing the lower incisor teeth is common for Shilluk youths, as well as ethnic scarification which consists of making a series of raised bumps across the forehead just above the eyebrows.

Traditionally, to marry, Shilluk men had to present the bride's family with brideprice, normally consisting of about four to six head of oxen and one milch cow, and several sheep and goats. However, this dowry is in most cases not paid to the father-in-law at once. One ox is paid to the elders of the village when they arrange the marriage business, one or more at the celebration of the marriage and another when the first child is born. In case of a divorce, if the brideprice is not returned the children stay with the father but if returned he surrenders them to their mother.

Upon the death of the reth, the corpse is walled in his royal house, which becomes his temporary tomb. Later his bones are collected for interment in the hamlet of his birth.

Male or female commoners are washed and shaved at death and wrapped in a shroud. The body is rested on its right side with the head facing easterly. Post-mortem memorial services take place first at the graveside, a few months later, and for higher status person a commemoration can take place a year or more later.

The sons inherited the property of their father. The wives of the deceased father were divided among the children, who would in most cases marry them, except their mother. It is said that sometimes when a husband was very old, his wives could put him to death, to get a younger companion.

The Shilluk people, their language and folklore by Westermann, Diedrich, 1875-1956

Struck, An Unlocated Tribe on the White Nile, Journal of the African Society. London 1908