Karyenda and the Royal Burundi Drummers 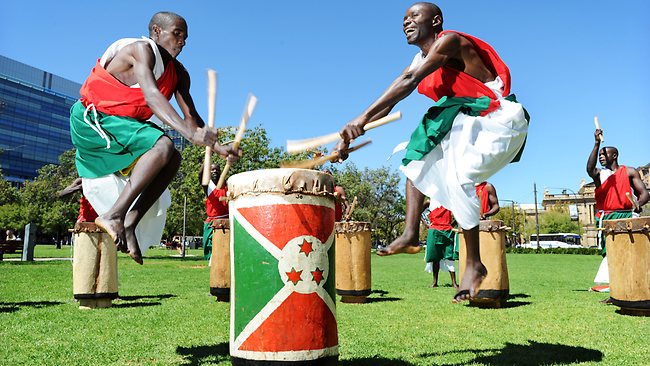 The karyenda is a traditional Burundian drum that was the main symbol of the King (Mwami)and had semi-divine status representing fertility and regeneration. The king interpreted the beatings of the karyenda into rules that governed the kingdom. After gaining independence from Belgium in 1962, the Karyenda was the national flag symbol and court of arms until it was replaced in 1966 when Burundi became a republic.

The drums used by the royal drummers are made from hollowed tree trunks covered with animal skins. According to Burundian cultural researcher Patrice Ntafatiro, women were allowed to beat the drums before but was later reserved for men. The drums, however, became representative of the female and were designed in a way that would reflect this symbolism.

The researcher further states that the practice of beating the drums was initially a reserve of the Abanyagisaka clan located in Gitenga, Central Burundi. The Abasongore clan, who were known for their handiwork and the Abaragane clan, who were blacksmiths who provided the iron equipment to make drums from tree trunks, were later added to expand the family of drummers. The three families are the originators of this Burundian drumbeat. However, more and more people took part in drum making and drum playing as time went by.

The design of the Royal Drum personifies the body of a woman. In this way, women are made part of the drumming performance without having to perform. The body parts represented on a typical Royal Drum are the breasts, the navel, the stomach and the genitals.

The genitals of the drum are called Ubwami (a euphemism in Burundian culture which symbolises the intimate parts of a female and translates to the kingdom). This is the part that the drummers beat with sticks to produce a musical rhythm that is coordinated spectacularly.

The performance of the Royal Drummers has been the same for centuries, with the techniques and traditions passed down from father to son.

To begin the performance, the drummers enter the stage balancing the heavy drums on their heads while singing and playing. Some extra members carry ornamental spears and shields and lead the procession with their dance. They then perform a series of rhythms, sometimes accompanied by song, and exit the stage the same way, carrying the drums on their heads and playing.

About twelve to fifteen drums are arranged in a semicircle around a central drum(Inkiranya). Surrounding the Inkiranya are Amashako drums which provide a continuous beat, and Ibishikiso drums, which follow the rhythm established by the Inkiranya.

The ritual drumming is performed during national or local feasts, and to welcome important visitors. It is also believed to awaken the spirits of the ancestors and drive out evil spirits.

The bearers are recruited from sanctuaries across the country, many of whom are the descendants of drum sanctuary guards. The ritual dance of the royal drum, its values and the drum-making skills are passed down through practice and formal education.

The spectacular and culturally rich drum performance was inscribed on the Representative List of the Intangible Cultural Heritage of Humanity of the UN's heritage agency UNESCO in 2014.

Today, the ritual dance of the royal drum is an opportunity to convey cultural, political and social messages and a means of bringing people of diverse generations and origins together.

Music and musical instruments of Burundi

The rhythm of Burundi: Victoria Theatre hears the sound of Africa

The Drummers of Burundi statistics and tagging at Last. FM

Ritual dance of the royal drum

Why the Women of Burundi Are Banned from Playing the Drums

The Burundian drum is at a crossroads between heritage and commodification