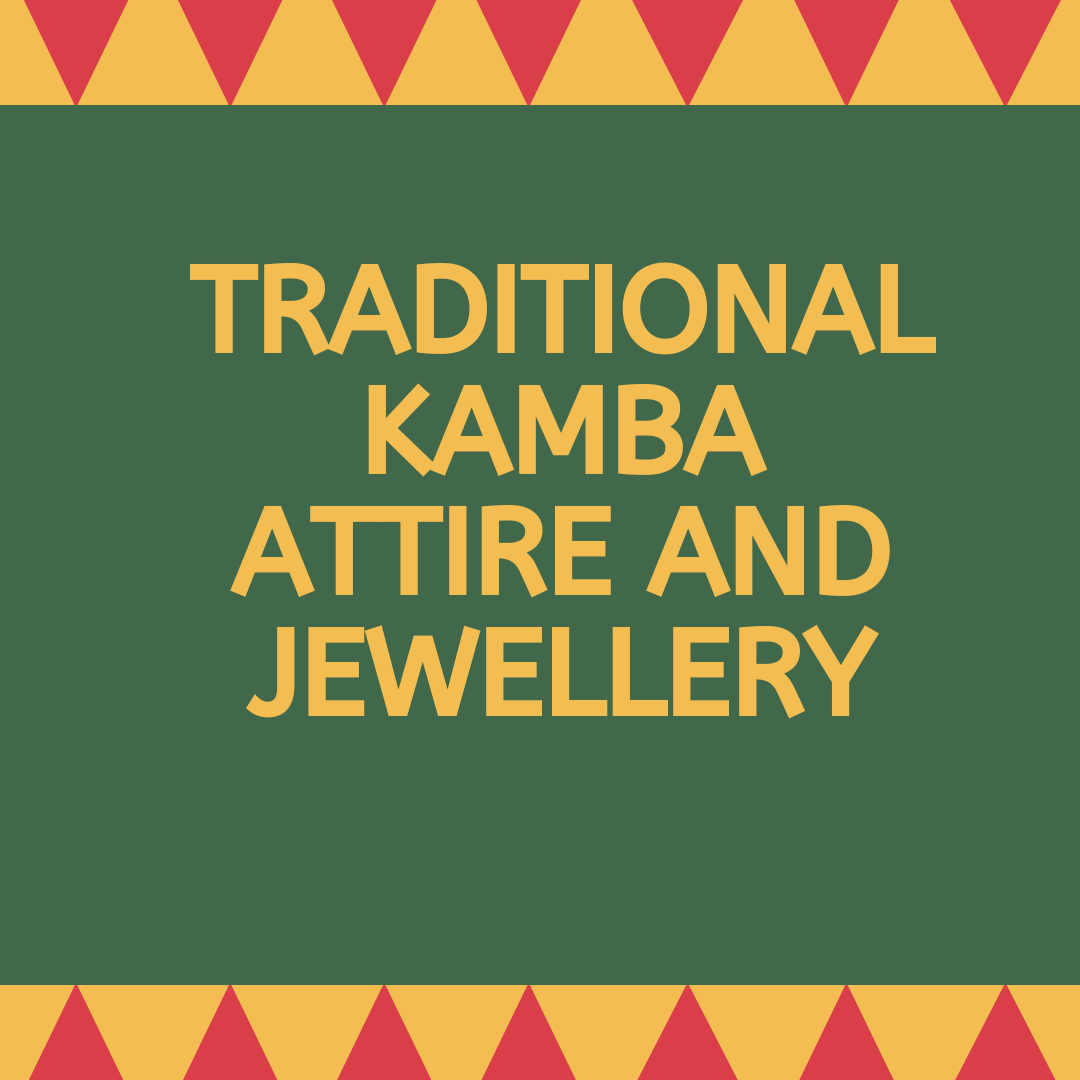 They made clothes from tree bark and specially treated goat or calf skins. However, the Kamba people of the modern day, like other tribes in Kenya, have acquired the conventional clothing of the west.

Occasions and Attire among the Kamba

During weddings, the bride wore attractive bangles and laces. The bridegroom had jewellery and markings that displayed how energetic he was to attract the suitor.

When performing at intercommunity functions, young Kamba men and women presented the best attires and jewellery. They had to prove to other communities how rich the Kamba culture was.

Various dance groups wore beadwork of distinct patterns and colours. It helped them complete their beauty and distinguish themselves from other groups.

In the past, animal skin and sisal threads made men’s clothes. The clothes only covered the private parts. They had different jewellery, such as neck chains, bracelets and anklets, made of brass and copper.

Sometimes both genders wore them. However, each gender kept its designs.

Older men wore heavy blanket-like clothes to keep themselves warm during cold nights and months. They had shorts made from tree bark or hunted animal skin like deer, antelopes and gazelles.

A young Kamba man, ‘Mwanake’ in plural “Anake’, was a step ahead in fashion matters of the community. He had to impress the girls mostly during local dances. 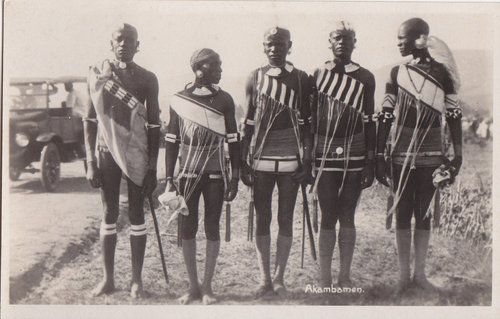 A group of Kamba warriors

There was no permanent clothing for covering the heads. Usually, the men kept their hair as short as possible. However, individuals could either partially/fully shave or maintain their hair in a style that suited them best.

Down on the abdomen, Young men wrapped the lower body parts with ‘Mulia’, a spiral wire vest. They put on body ornaments which were non-metal and probably of older variations.

An example was ‘Kikuto’, a corset/vest woven from beads in an ornate geometric design worn on the midbody.

Finger rings(ngoma), made from iron and brass, were used for decoration or fighting purposes. They could tear the skin and veins of enemies in close physical combat. They also put on ‘Kitang’a’, an armlet and a bracelet made of copper.

On the legs, they wore spats, nicknamed ‘Mîthanga’, on each ankle and covered part of the shin. They protected the legs from dust and injuries sustained on rough terrains and for decoration when incorporated with beads.

Women wore knee-length tree bark or leather skirts decorated with different bead works. They also had necklaces similar to men. They got the beads from trading with the Arabs and Waswahili.

Young women wore wrapper-like skirts made of skin. They covered their chests using similar clothing, although shorter than skirts.

Just like older men, the older women wore heavy blanket-like clothes to keep themselves warm during cold nights and months. However, they differed in quality and style. 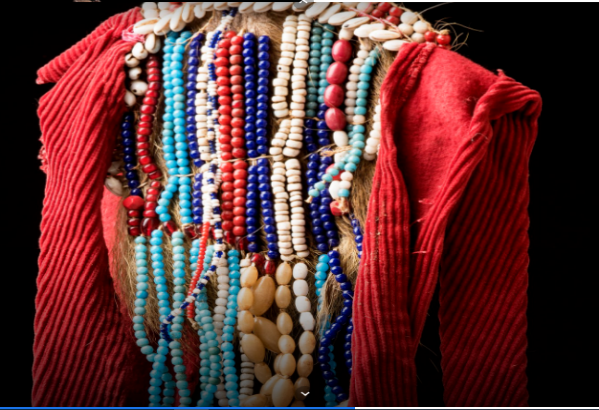 Both men and women had their earlobes enlarged. Kivuli, a typical cylindrical ornament used for decoration purposes, was used. The kivuli was kept even after the enlargement process.

The earrings, ‘Mûlia wa kûtû’ (made of brass or copper), were decorated with a metal chain referred to as ‘Mûnyo’. Both men and women used them.

The community had various neck ornaments. They included ‘Ndiki’- chain or cord with copper or brass beads, ‘Mûlia wa ngingo’ – a collection of copper rings and ‘Imili’ – an iron closely wrapped by a fine copper wire.

They also wore a chain of Chinese beads known as Isûa on the neck. Furthermore, flat sea shells, known as ‘Kivui’, augmented the neck ornaments. 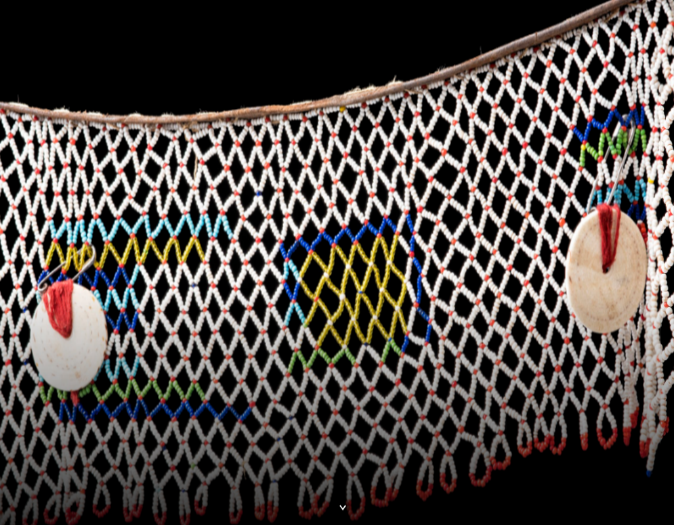 Traditionally, both genders remained barefoot at home or when working in the fields. They only wore leather sandals when leaving the neighbourhood to visit relatives or friends and when going to distant markets. 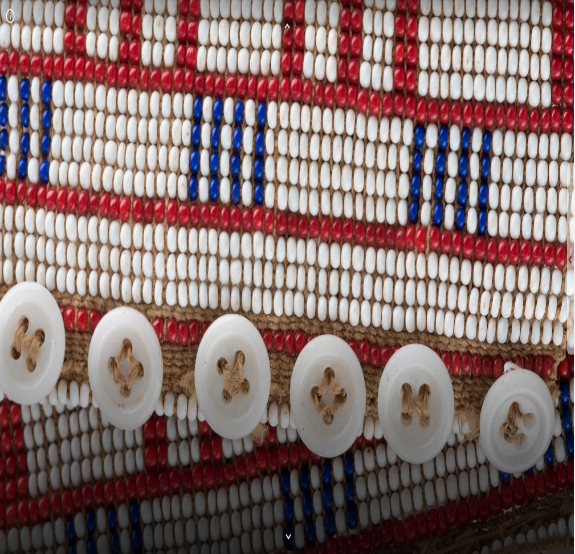 In the late 19th century, the Kamba community expanded its trade networks and could get cotton from as far as India. It Opened their skills in cloth making.

They also made leather sandals, known as ‘Mûkalya’ (‘Mîkalya’ in plural), with rubber from old and unused tyres. 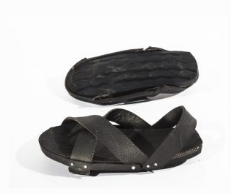 Sometimes, both genders also shared jewellery like Kitang’a, worn on the abdomen and Kikuto, worn on the midbody.

Comparison between then and now

The Kamba women of modern society are attired in western fashion, picking everything from skirts, jeans, dresses, shorts, trousers and blouses (tops).

The only respectable mode of dressing is skirts, and the customs do not condone wearing trousers by women, although they still do. The reason is that wearing short dresses or tiny shorts by women will attract unnecessary attention from men.

Later in the 20th century, men wore trousers and shirts or t-shirts. The young boys, as a rule, wore cotton shorts and tee-shirts or short-sleeved shirts. Today, everyone has the freedom to dress how they please.

The school-going children used to shave their heads to maintain the spirit of equality and uniformity. However, today girls can keep their hair long.

The dress code was strictly monitored and did not have many known taboos. An individual wore what the elders directed them to. The existing taboos were kind of mythical.

For instance, if a man wore a woman’s clothing, people believed that the gods could interchange him to become a woman and vice versa. The Kamba people thought the interchanging came as a disease in which spirits would possess the individual to the extent of wanting to wear the other gender’s clothes.

The community tends to dress conservatively, linking being smart and dressing well to pride and fashion. If an individual wore torn or revealing clothes, this would mean that they would lose a degree of respect within society.

The Kamba tribe has a variety of costumes and jewellery worn throughout different centuries. These costumes are not well documented. The current generation ventures into western fashion, forgetting their roots.

It is pertinent for this generation to get to know them and try to apply them in real life. We must explore the community’s deep cultures and show the world what we can offer.