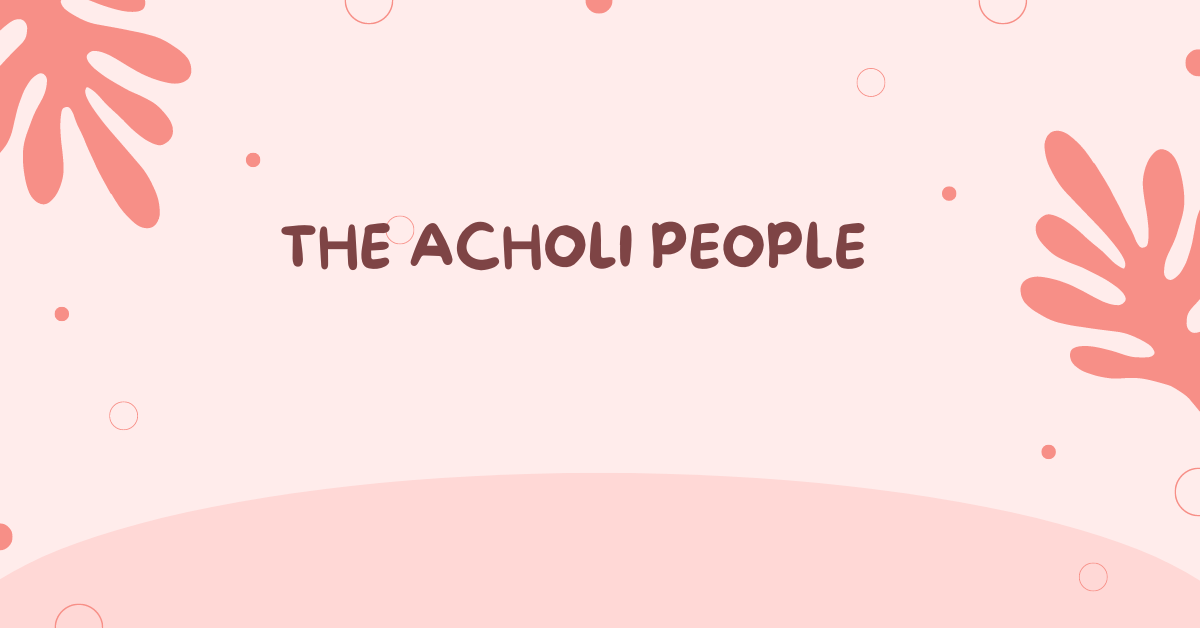 The Acholi/Acoli people are a Luo nation from Acholiland in Northern Uganda(Gulu, Amuru, Kitgum and Pader Districts) and Magwe County in South Sudan.

ORIGIN OF THE ACHOLI PEOPLE

The Acholi migrated to northern Uganda from Bahr el Ghazal in South Sudan between 1400-1800 AD. They wandered around Uganda, searching for pastures for cattle and goats. A conflict later arose between their leader Gipir and his brother Labongo over a bead swallowed by a child. Gipir moved west, and his descendants include the Alur. Labongo's group moved east of the Nile by AD 1500, and it was from this group that the present-day Acholi and Langi emerged.

Arabic-speaking traders from the north named them Shooli, a term that transformed into Acoli during the second half of the nineteenth century. The traders drew the similarity of the Acholi to the Shilluk or Collo of southern Sudan they had previously encountered.

They speak the Acholi language, a Western Nilotic language classified as Luo and mutually intelligible with Lango and other Luo languages. The language has three dialects: Labwor, Nyakwai and Dhopaluo, and an estimated 2.3 million native speakers.

SOCIOPOLITICAL ORGANIZATION OF THE ACHOLI

Traditionally, the Acholi had chiefdoms headed by a chief (Rwot). The rwot came from one lineage, and each chiefdom had several villages of different patrilineal clans(kaka).

Some of the big clans had sub-clans and sub-chiefs. Their traditional communities were hamlets of circular high peaked huts furnished with a mud sleeping platform and a fireplace.

As skilled hunters, clans owned hunting tracts. They used spears and long, narrow giraffe or ox hide shields in war. Presently, they keep sheep, goats and cattle but are not as committed to pastoralism as other nilotes.

They cultivate millet as their staple food and tobacco for trade. They also plant maize, sorghum, beans, peanuts (groundnuts) and other savanna crops and engage in stream and swamp fishing.

Acholi religious beliefs focused on three types of spirits (Jok/Jogi). There were the spirits of known relatives, especially lineage ancestors, and a second type was the non-ancestral jok of the chiefdom as a whole. Both spirits were generous. The people approached them regarding general concerns such as good health, fertility, and appeals, or thanks for good harvests.

The third group of spirits were of unknown persons and dangerous beasts; these were vicious, embodied as ghosts, believed to cause sickness and other misfortunes, and dealt with using spirit possession.

Music in Acholi-land was and is still used to transfer cultural knowledge through generations. The Acholi people have different traditional dances for various occasions and reasons. The most common are:

It was a courtship dance that allowed young men to demonstrate their dancing prowess and physical vigour to secure a marriage partner.

The young men danced in a semi-circle with their legs interlocked while singing short repetitive songs. They wore ostrich or cock feathers on their heads and carried calabashes in their left hands.

The young women danced silently, facing the men until the moko stage, when each woman would identify her preferred male of choice and push him out of the semi-circle. The young couple would retreat to a quiet spot to become better acquainted before returning to the dance at a later point.

However, dancing Larakaraka not only provided individuals with a chance to excel amongst their counterparts, but the scripted moves, costumes and instruments employed also reproduced and conveyed appropriate gendered roles and behaviours to the audience.

Also known as the war dance, the Otole dance served several complementary functions. The vigorous and energetic movements helped prepare men for the demands of fighting, whilst the sequences performed during the mock fights instructed men on formation patterns, advance and retreat strategies and how to attack and defend with a spear and shield. It also emotionally prepared men for violent encounters, acting as a mechanism for motivation and encouragement and inciting military courage and confidence.

Only girls performed the dance during the rainy season. They danced and sang in a straight line.

This war dance had fighting scenes performed with spears and shields.

It was a court dance (in the king's palace) performed in a circle by the older men and women, with the circle representing a fence that surrounds the palace court.

This dance was very rhythmic and the leading dancer dressed in leopard skin. The men carried and beat the drums.

Performed on bright days when the sun was out, young girls danced to attract the young boys, their movements imitating flying birds.

The dance celebrated a successful hunting event. Both men and women danced in one line facing each other while clapping hands and running up and down while jumping.

Both men and women performed this dance without any drums. They made two circles, with the men building up the outer one and putting their hands on the girls' heads while holding sticks with the other hand.

Performed during funerals, the women danced around the burial site while the men made up the outer circle with a spear and shield.

Performed at weddings or beer festivities, Men sat in circles on the floor playing the harp while the women danced the Apiti.

Traditionally, a young man depended on his lineage head and elders for permission to marry. Elders from the woman's lineage were also much involved in the discussions and negotiations surrounding the marriage.

Bride prices have varied over time but usually included iron objects, domestic animals and money in the twentieth century. Marriage has been typically patriarchal, with the husband and father as the undisputed head of the household.

Although polygamy has often been ideal, restrictions have made it rare. Children are highly prized, and historically, a couple did not set up their household until the birth of their first child. They lived with the husband's mother until then.

Childlessness is one of the most severe misfortunes imaginable. The woman always takes the blame; the marriage ends, or the husband takes a second wife.