👨 The Story of Kintu 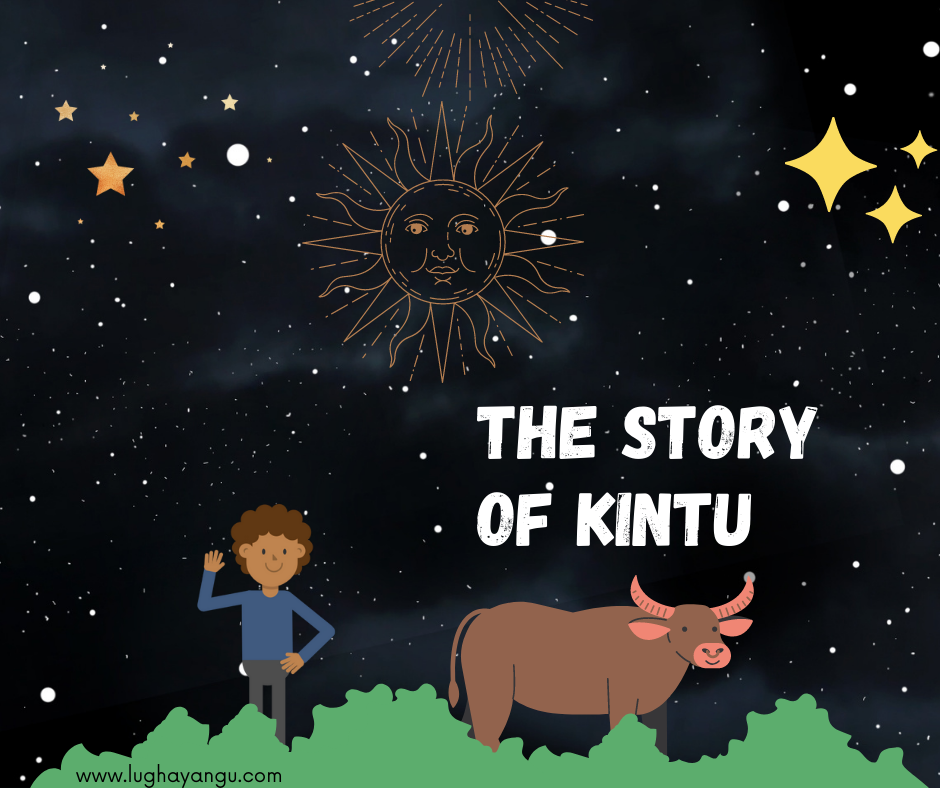 A mythical legend, Kintu, exists among the Baganda (a Bantu group and the largest ethnicity in Uganda). Kintu, the first man on earth, lived with a cow he depended on for milk.
Gulu, the creator of all things, lived in heaven with his three children, his daughter Nambi and her two brothers, Walumbe and Kayikuzi. They often went on adventures on earth. On one particular visit, they met Kintu grazing his cows. Nambi immediately fell in love!

She wished to have him as her husband, but her father doubted his capability. Gulu decided to test Kintu before he could consent to the marriage.

He secretly took Kintu's cow to heaven and put it among his cattle. When Kintu found his beloved cow was missing, he got devasted. Soon,  the pangs of hunger were too much for him to bear. He had no option but to survive on herbs and leaves.

Nambi spotted the stolen cow among her father's and told Kintu about it. He went to heaven in a bid to recover his lost animal. Gulu put him up through several tests, which he successfully passed, convincing him to hand over his daughter for marriage.

Before their journey back to earth, Gulu warned them to hurry before Walumbe(meaning death) came back as he would insist on going back with them. If this happened, it would only bring them trouble and unhappiness. They were sent off with cattle, a fowl and a banana tree and were cautioned not to return even if they forgot anything important.

While on their way, Nambi remembered she had forgotten grains to feed the fowl. She insisted on going back despite the pleas from her husband not to. She sneaked back in the wee hours and told her father the reason for her return. He was disappointed as he had warned her not to return.

Nambi took the grains and crept away but was unlucky as death saw her and followed her back to earth. Kintu was displeased to see Walumbe as he wasn't ready to live with him.

On earth, Nambi planted her garden, and her crops did well, and they lived happily. However, it was short-lived. Death asked for one of their daughters to be his cook. Kuntu refused as he did not know the explanation he would give to Gulu for giving away his daughter to death. Walumbe went away but soon came back to ask for a child. Kuntu yet again refused, and Walumbe promised to kill all his children.

Not long after, one of the kids fell ill and died and then another followed. Kiintu went to Gulu to complain about the kids' death. Gulu told him they had to live with death among them as they had disobeyed him. Kuntu pleaded with him, and he agreed to send death's brother, Kayikuzi, to earth to return Walumbe to heaven.

Kayikuzi met death on earth and told him he had come to take him back to heaven. He agreed to go on the condition that the sister accompanies them. Kayikuzi refused since the sister was married and had to stay with the husband, and that caused a dispute among the brothers. Kayikuzi angrily ordered his brother to do as he had commanded, but, unfortunately, he slipped from his hands and fled back to earth.

Kayikuzi tried to capture him, but he always escaped. He then told the people that he was going on a final hunt for his brother. They had to stay indoors, and if they saw death passing by, they should remain still.

However, some children who had gone out to herd their goats saw death. Terrified, they screamed in horror! Kayikazi went to them to inquire about the cause of the screams. He was frustrated! His brother once again outwitted him.

With nothing much to do, Kayikazi went back to heaven. Humans lived with the only hope that death would not kill them all. Since then, death has lived on earth.
Presently, a traditional religious shrine exists at Tanda pits (a point believed Walumbe used to hide from Gulu) near Mityana town in Uganda. They are a group of over 24 circular holes in the forest. People come from far and wide to pray for blessings, healing, fortune, prosperity and peace in their homes.

🌙 The Moon and the Dog