Taytu Betul; the formidable queen and empress of Ethiopia 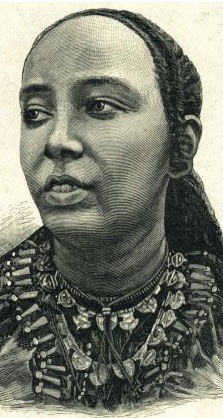 Taytu Betul was the wife of Emperor Menelik II and one of Ethiopia's noble leaders who were instrumental in securing Ethiopia as the only uncolonized country on the African continent.

Being of Oromo descent(a historically oppressed ethnic group), she was not a preferred choice for the empress. She was also unable to give birth(after facing female genital mutilation before her third birthday), yet this was one of the main expectations of any female royal and was in four failed marriages before marrying Emperor Menilek II.

However, having been born into a prominent aristocratic family related to the Solomonic dynasty overrode any concerns over her Oromo heritage.

Her marriage to Menelik was a powerful political union. Both parties brought alliances from northern and southern Ethiopia to the table. Once the pair became emperor and empress(she married Menelik when he was still King of Shewa), they forged more allegiances with the region's various rulers, partly through political prowess and partly through military force.

Taytu wasn't just an empress! She made sure she was involved in most political decision-making, diplomacy, and military campaigns. Some people even considered her an equal to her husband as she often took a tough stance on matters more than him.

She founded and named the city of Addis Ababa(meaning new Flower), Ethiopia's capital city, in 1887, by persuading the emperor to build a house near the hot springs at the foot of the tableland and grant land in the area to members of the nobility.

European colonization was highly expanding in Africa, and Italy desired to expand its territories by colonizing Ethiopia. Emperor Menelik II, highly resistant to this, agreed to establish a treaty instead(Treaty of Wuchale ). He surrendered some of Ethiopia's territories in exchange for the assurance of Ethiopia's independence and financial and military assistance from Italy.

Taytu was suspicious of the European intentions towards her people as the Italian version made Ethiopia an Italian protectorate, while the Amharic version did not.

She tore up the agreement after multiple failed attempts for peace talks, and Italy invaded the Empire. They decided to fight back in the battle of Adwa, in which she led a troop of over 5,000 soldiers.

Taytu first success in the war was during the siege of Mekelle in January 1896, when she cut off the water supply to the fort where Italians took refuge. After ten days of horrific suffering, the Italians surrendered, giving back the Fort of Mekelle.

The war ended with the Battle of Adwa a month later, where Italy suffered a humbling blow from a united Ethiopia. Some historians claim that Taytu joined the fighting in person after seeing her soldiers beginning to lose heart.

In 1909 Menelik suffered a stroke, and Taytu took over the political work, efficiently ruling the country herself. It did not sit well with her rivals in the royal family, and they pressured her into giving up power.

She was later ousted from the main palace after the death of her husband in 1913, putting an end to her political influence. She died in 1917, but her legacy still lives on. She remains a national heroine in Ethiopia.

Schwarz-Bart, Simone. In Praise of Black Women Volume 2: Heroines of the Slavery Era.