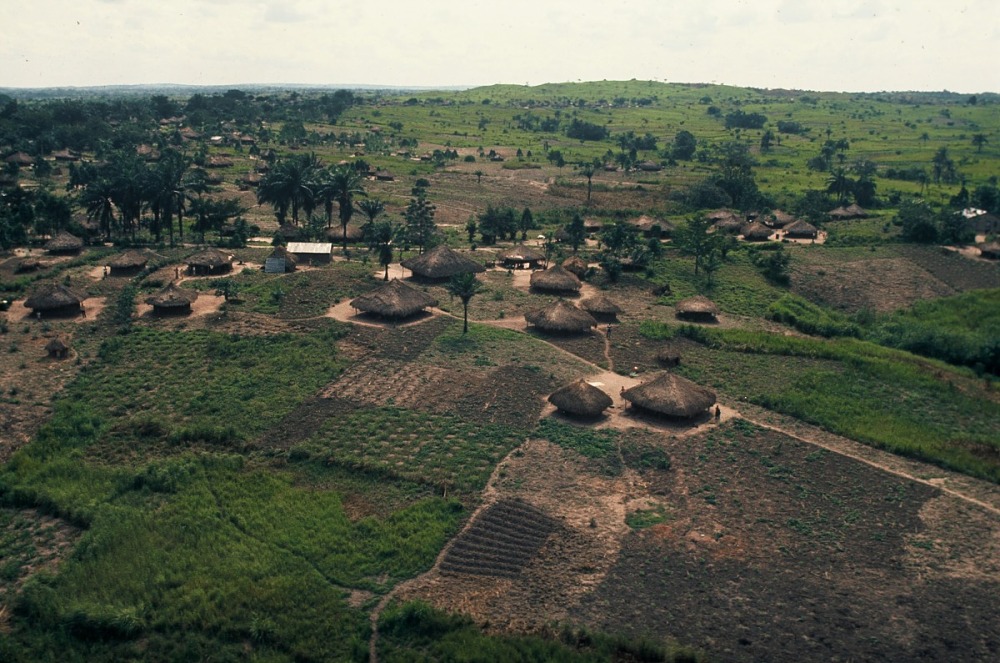 Traditional village among the Luba people

The Luba/Baluba people are an ethnolinguistic group indigenous to the south-central region of the Democratic Republic of the Congo. They are indigenous to the Katanga, Kasai, and Maniema regions and the largest ethnic group in DRC with a population of about 14 million people. They consist of many sub-groups who speak various dialects of Luba (Luba-Kasai, Luba-Katanga) or other languages, such as Swahili.

They are renowned for creating the powerful pre-colonial African kingdom of Luba in the marshy grasslands of the Upemba depression, known as the Baluba confederation.

Baluba speak two distinct Bantu Luba languages known as Tshiluba/Luba-Kasai and Kiluba/Luba-Katanga. Luba-Kasai is spoken chiefly in the Kasai Occidental and Kasai Oriental provinces of the Democratic Republic of the Congo and is widely used in education as well as churches. On the other hand, Luba-Katanga is spoken mainly in the southeast area of the country around Kabongo, Kamina, Luena, Lubudi, Malemba Nkulu, Mulongo, Manono, Kaniama and mostly in Katanga areas.

The Baluba were ruled by a king referred to as Mulopwe, which means sacred. The Kingdom was founded by King Nkongolo Mwamba in the 15th century and governed the clans through chiefs called Balopwe and nobles known as Bamfumus.

The titles were perceived to be sacred and supernatural power was associated with the holders. This created a strict code of loyalty and respect for the crown. The ruling class were almost exclusively merchants who often held a monopoly in trade and used it to consolidate their power throughout Central Africa.

The Mbudye (memory men) were the keepers of the Luba tradition and passed it along through oral means. They were allowed passage everywhere in the kingdom, even the royal palace, and had a supernatural authority, only second to the Mulopwe.

However, the Luba kingdom was destroyed by the long-distance trade that they practised by the Nyamwezi people from Tanzania, under the leadership of their chief, Msiri. The Kingdom was raided for slaves and ivory but what led to the ultimate destruction was a succession dispute after the death of King Ilunga Kabale in 1874.

The Baluba mainly practice agriculture. The commonly cultivated crops are cassava and maize and, to a lesser extent, sweet potatoes, peanuts, tomatoes, onions, beans, cucumbers, tobacco, and sesame. Millet and sorghum are mainly grown for use in beer brewing. Bananas, mangoes, Elaeis -palm plantations and wild olives are some of the fruits grown.

Along the Zaire River and in the Upemba Depression, fishing is the main economic activity. They also breed sheep, goats and poultry.

Traditionally, they were involved in trade and the main items were salt, copper, iron ore, ivory and slaves. Hunting was also practised and it collectively took place when the savanna was set ablaze at the end of the dry season.

The traditional religious beliefs of the Luba people included the belief in the existence of a Universal Creator, Shakapanga, Leza (Supreme God), mikishi or bavidye (various spirits), and bankambo (ancestral spirits).

The religious life included prayers, community singing, dances, offerings, rites of passage, rituals and invocations. The rituals and services were performed by priests(Nsengha/Kitobo), and for anxiety and ailments, a healer( Nganga/Mfwintshi) would perform Lubuko (divination).

The religious code of civil life expected one to be authentic(bumuntu), have a good heart(mucima muyampe) and have dignity and self-respect ( buleme ).

Christianity was later introduced to them by missionaries who came with the Belgium colonial rule.

Large-scale polygamy was practised by the sacred chiefs while small-scale polygamy was the ideal of every man. The first wife occupied a position of pre-eminence in respect to her co-wives. However, monogamy is the norm now after it gained ground with Christianization. The prospective wife did not come from the man's grandparents' lineages, nor have a common great-grandparent with him, nor be a close relative by marriage (wife's sister, sister's husband's sister, brother's wife's sister and so forth).

The family is a source of legitimacy, social recognition, status, acceptability and identity, and determines an individual's rights and privileges in society.

The Baluba were patrilineal and the inheritance of property rights and acquisition of citizenship was determined through the father's lineage.

They also practised the custom of a man marrying the widow of a deceased brother and the sister of his deceased wife. This was practised so that the loss of a parent did not cause a major disruption in the lives of the children.

Once a man/woman had identified their potential partner, they were both investigated by their families. If they did not agree that the couple should marry, the young man or woman often ran away with the candidate of their choice.

Once a Luba woman accepts a marriage proposal, she invites the man to meet her parents and pay the dowry. The parents of the bride invite all close and extended family members from both families to meet on an arranged date. The man and his family present the dowry, which usually consists of a sum of money (the actual dowry), clothing and footwear for the bride's parents, two goats (one for the bride's mother for the virginity of the daughter), drink, and accessories. In the past, the goat was not offered to the bride's family if the woman was not a virgin.

It is up to the family to decide what the accessories will be. The father to the bride often considers whether the dowry and accessories are enough, and if they are insufficient, he indicates the correct amount to be added to the initial dowry. The couple can live together even if the dowry is incomplete, but the man must complete its payment before the date agreed on with her parents.

After the delivery of the dowry, the celebration begins with the families getting to know each other. The woman goes to live with her new husband's family for one month, after which she returns to her family only to go back to her husband's house with the provisions for their new home.

Alexander Ives Bortolot (2003), Kingdoms of the Savanna: The Luba and Lunda Empires The Metropolitan Museum of Art