Gerewol Festival of the Wodaabe (Chad) 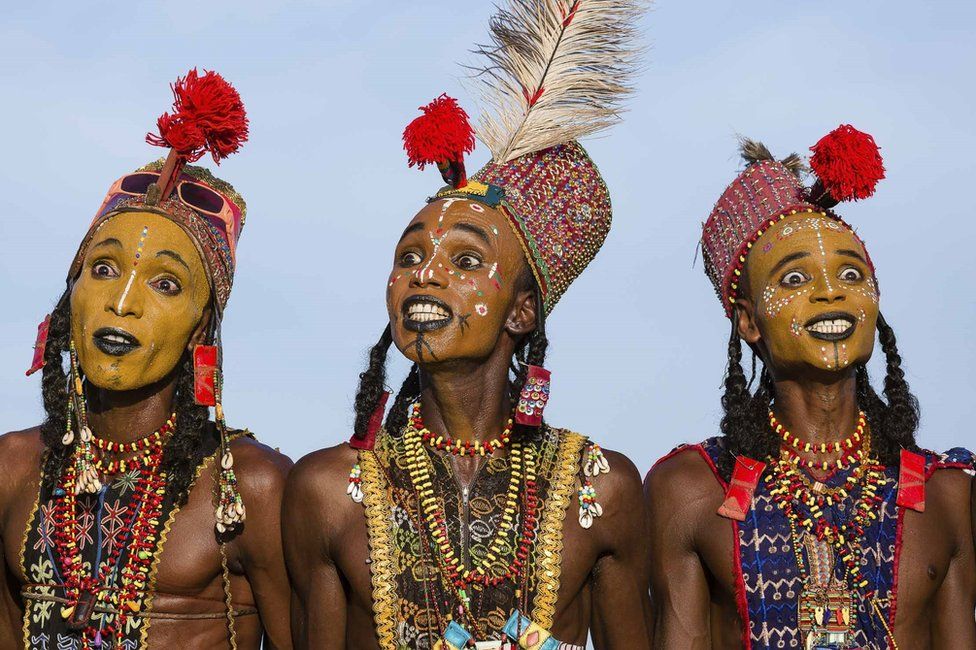 When we hear about beauty pageants, the ladies come to mind. However, with the Wodaabe people, a semi-nomadic tribe living in the Sahel region, southwestern part of Chad, it is the opposite.

At the end of September, just after the rainy season, the Wodaabe tribe gather for a week-long courtship ceremony, the Gerewol Festival. It is a time to socialize, hold tribal meetings, baptize babies, barter over dowries or help each other out if needed. The festival's highlight is the dance by the young men who intend to win over the hearts of women.

During this surreal beauty pageant, handsome young men paint their faces with red ochre, draw on white dots, pile on jewellery and sweep on a slick of black or blue lipstick. They then dance in long lines each evening in front of groups of women with interlinked arms.

The dance performed is known as yaake. At about 40°C, men dance for hours, baring their teeth and rolling their eyes to impress the judges with their pearly white teeth and clear eyes.

They sing loudly and jump up and down to show off their stamina. Older men and women run up and down the length of dancers, shouting encouragement and urging them to continue with the energetic movements.

Their judges are young marriageable females, often still in their teens, who evaluate the men carefully on their charms, dancing skills, stamina, and appearance, before slowly zooming in on their most attractive pick. It may remain a playful flirtation, lead to a night of love or turn into a marriage proposal.

The Wodaabe women look for tallness, white eyes and teeth, a slim nose and a symmetrical face. The men must ensure that their make-up, clothing and facial expressions match these features.

The selection is tense, with the young women walking down the line of dancers, poker-faced, per the Wodaabe code of behaviour (pulaku). Each then taps their favourite man, and everyone rushes in to celebrate and congratulate the winners. Being selected is an honour. The women then return to their camps and wait for the men they choose to follow.

After the festivities, the Wodaabe clans disperse for another year of roaming the savanna, their donkeys packed with their belongings and small children on top. Just married women follow their new husbands, while pregnant women temporarily live with their mothers.

N/B: The more famous Gerewol happens in Niger. However, Chad's large size and isolation, created by years of conflict in the region, have aided in keeping this fascinating tradition intact, as the festivities are smaller and get less publicity.

Courtship Rituals and Beauty Contests in the Sahel

The men competing for love in the deserts of Chad

Gerewol Festival - The most amazing cultural trip to Chad