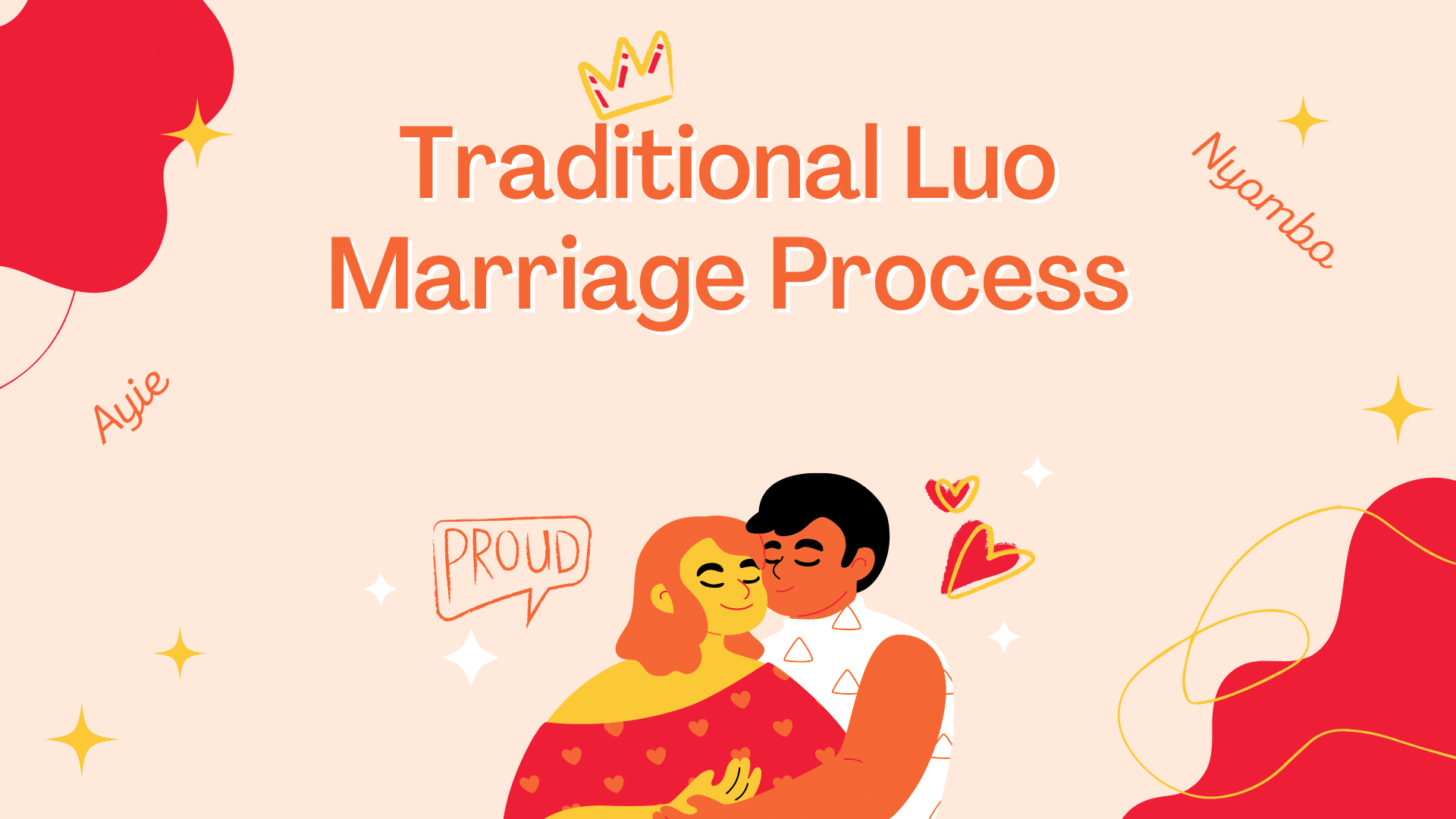 The Luos, believed to have originated from Sudan, are currently settled around Lake Victoria in Kenya and Tanzania.

In Kenya, the Luos are the fourth largest ethnic group. They are known for their quest for perfection, musical skills and instruments.

Like many other tribes, the Luos had traditions that kept them distinct from others. For instance, the removal of the six front teeth from the lower jaw of both men and women was unique. It was done to help administer medicine in case someone contracted lockjaw disease and to test their courage and endurance.

Among the rites of passage was marriage. Marriage was treated with the utmost respect. It ensured the continuity of the family tree, and as such, specific processes had to be followed.

When a man came of age, he was tasked to look for a wife; Young women were seldom on the lookout for potential husbands.

Once they identified a potential wife, any of the below processes would be used to ensure that the potential wife reaches her 'place of relevance.'

"Yuecho" involved the forceful activity of carrying away the lady to the husband's house.

It was an immaculate process. Once the man identified a potential catch, he would carefully note her movements, especially the places she frequently visited, for example, where she fetched firewood and water, among others.

On the planned date, the man, alongside other men, would kidnap the lady. It's to be noted that the girl could make noise, but not even passers-by could be concerned, as they knew the procedure.

Closely related to forceful abduction was "amen" - wrestling before the girl is taken. The man could wrestle the lady's brothers, and if he won, the lady had to submit to him. The reverse was true.

In some situations, the man had to wrestle the lady. If he could not wrestle down the lady, he was considered a weak man unable to care for her; and lost it all.

"Ja-gam", simply a spy, was responsible for linking a lady to potential suitors. Most often, "Ja-gam" was an aunt who would connect her niece to a man.

After any of these processes were done, a lady was not yet considered married.

Note:  As in the case of "yuecho", the lady was considered to have a husband provided she slept under the same roof with the man for a whole night, and arrangements for the following stages would begin. Such a lady, if by any mistake returns to her home, would be called "ochot" (prostitute).

After arriving in her new home, the lady did not become a wife immediately. The man had to first formally visit her parents to take "Ayie". This was a gesture to the in-laws that the man was satisfied with the lady. He would then proceed to seek her hand in marriage.

Ayie was specifically for the bride's mother. It took place at the bride's home, and the sole purpose was to seek the bride's parents' consent for the intended union.

The elders did most of the talking.

Daughters were tasked with various chores that the mother had earlier solely performed, and so when they left their homes, it was considered a huge loss to the family, especially to the mother.

During this activity, the man's family would approach the lady's family for an "ayie": so that the mother releases her daughter to him.

The ceremony seals the marriage and allows the couple to live together. Any attempt by the man to meet the lady's parents before "ayie" was frowned upon and even fined as it was considered unofficial.

Both sides had to make proper introductions at the beginning of the conversations. If present, the nuclear family of the girl's mother had to be introduced. This was significant as it showed the girl had a network of people who watched her grow, cared about her and would come to her rescue in the event of anything.

The bride then prepared food for the groom and fed him in front of everyone to show her acceptance and signal to the groom's family the food she would cook in her home. The idea was to make the groom's mother, "maro", confident about her son's healthy diet.

On the day of the visit, the girl's mother prepared the suitor delicious meals (chicken and beef), which were slaughtered on the same day.

A variety of meals were served on this special occasion. After the meal, the man was required to give money to the mother, father, uncles, siblings and elders of the girl's family,  and cooks. The money was given in envelopes depending on the groom's financial muscles.

Note: The law did not allow the groom to stay past midnight.

The suitors were allowed a maximum of 5 weeks to be back for dowry negotiations after the Ayie.

The groom would leave with his entourage, and the bride would follow him after about 3-7 days.

The final bit was "nyombo" or "keny" (dowry payment).

Dowry was paid according to the capacity and ability of the suitor. During negotiations, it was common to hear the phrases like '30 heads of cattle.'

The process was done in broad daylight and well-publicized to give pride to the parents, in-laws and all other relatives.

The man, accompanied by his brothers, would go to the lady's home, taking three to four cows with them.

The entourage would slowly enter the lady's home, feigning indifference and reluctance. The man was supposed to be inconspicuous as possible by concealing himself among his companions.

No ceremonies took place on the day of arrival. The guests were given food and spent the night in the hut, "simba" - the house of the bride's unmarried brother.

The following day, the man would go to the hut of the bride's mother for a formal introduction.

The meat was served, and the day was spent feasting and drinking. The rest of the gathering was entertained by professional singers and dancers.

Finally, in the evening, the man and the bride's father sat down, and the bargaining began.

During the bargaining, the bride's father tried to get as much payment as possible from the man. If he was too greedy, the negotiation was broken off, and the man paid compensation for the expenses incurred in entertaining his party and the loss of the lady's virginity.

However, if the two agreed, it was final. No subtractions nor additions were allowed.

The marriage institution was given so much respect that in-laws did not accord respect to those who failed to follow the proper procedure.

In most cases, the bride price was paid in bits over a period suitable to the man's father. This could take months or years.

During this period, it was customary for the girl to visit her future husband from time to time. She was always accompanied by one or two girlfriends and was expected to stay for several days.

She slept in the hut with her betrothed, and intercourse was allowed. Sometimes, though rarely, the girl conceived. This was bad luck for the girl's parents but fortunate for the man, for the child needed to be born in the man's home.

He could consequently fast-track the marriage, which could now take place before he had paid the whole dowry; this enabled him to spread his payments over a longer period. The fact that the girl had the child meant no other man would take her away.

The wedding took place in the man's home, "dala". The girl arrived accompanied by her sisters or her brothers' wives, in case her sisters were still young.

An older woman also went with her, perhaps a married sister, who acted as a chaperone. The older woman's special duty was to see that the girl was treated correctly and the bride was polite to the man's parents.

Besides this exception, no older men or women were allowed in the girl's party. Permitted in the feast were the man's sisters, brothers, half-brothers, first cousins, his brothers' wives and male friends.

The feast lasted only a day, but if guests had come long distances, it lasted two or three days. The food consisted of porridge and meat. The young people were not given beer, but the man's mother usually brewed a small quantity for her husband and his brothers.

After this process, the girl was considered fully married.

Dowry payment was significant as marriage.

Marrying a relative was a great taboo, and when identified, it had to end. It is during the dowry process that vetting for consanguinity happens.