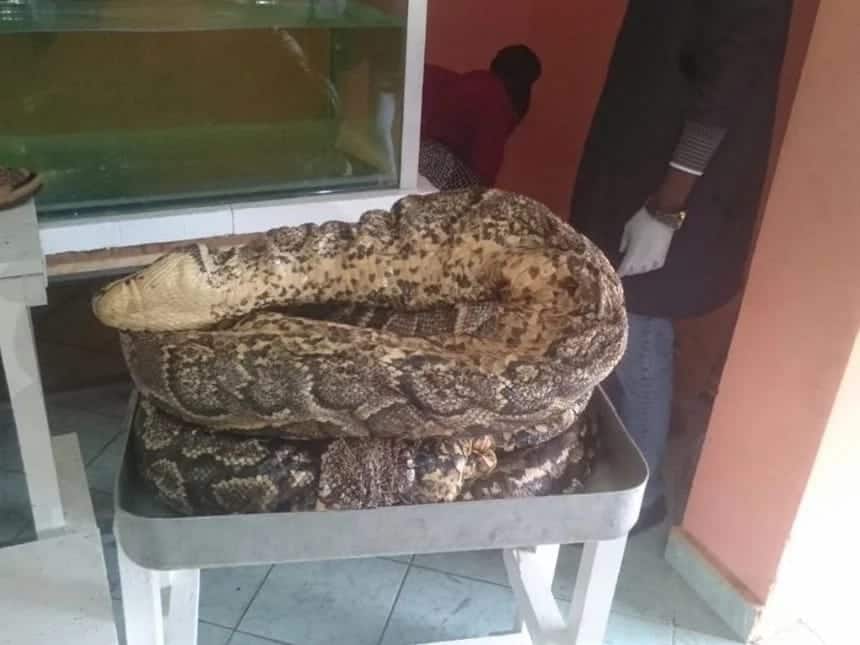 In the quiet village of Pap onditi, Nyakach sub-county, Kisumu county lived a mysterious man by the name of Omieri.

Shortly after he died, an enormous python (5.3 m in length and 74kg in weight) was sighted brooding over her eggs next to his Dala (homestead). The villagers started speculating that it was the man who had reincarnated as a python, and therefore, named it after him.

The Luo community from the Nyakach area traditionally valued Ng'ielo (pythons) as bearers of good luck. The mere appearance of a python signified that the doors of heaven would open and bring heavy downpour and consequently bountiful harvest.

So the appearance of Omieri was met with open arms and a lot of happiness. The villages took turns feeding it. They would strategically put chickens, goats and calves on its path.

The villagers believed that if Omieri ate your offering, then good luck was bound to come your way.

The news of Omieri spread like wildfire. Within a short time, visitors were trolling in from all corners of the world. Suddenly, the small village of Pap onditi had become a tourist hub.

On the 27th of February 1987, local tour guides set a bush on fire in a bid to make Omieri come out for viewing by the tourists. However, the fire got out of control, and Omieri suffered serious burns. Despite the efforts by KWS(Kenya Wildlife Service) and NMK(National Museums of Kenya) to save it, Omieri eventually died in July 1987.

Omieri's death left Nyakach in a very sombre mood. The villagers held a three-day mourning ceremony for it.

Some villagers blamed the death of Omieri on its three months stay in Nairobi. According to them, the change in weather and the snake not being able to drink from River Asawo and Oduro stream (believed to have healing powers) contributed significantly to the death.

The body of Omieri is being preserved at Nairobi National Museum.

What is your community's perception of snakes?